Despite a major breakthrough on chemicals policy, the European Union made lacklustre progress towards a robust green transition during the Portuguese presidency, a comprehensive assessment reveals. It is now up to Slovenia to step up the pace of reform as it takes over the EU’s steering wheel.

This is the conclusion of a comprehensive EEB’s biannual assessment of the outgoing presidency’s performance against 10 green tests which were defined at the outset of Portugal’s term (due out on Thursday 1 July 2021).

“Portugal limited its leadership to the art of the narrowly achievable during its presidency at a time when it urgently needed to push out the boundaries of the possible,” said EEB Deputy Secretary General Patrick ten Brink. “This is simply not good enough to face up to the unprecedented challenges of the climate crisis and biodiversity emergency.” 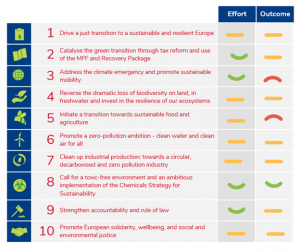 The Portuguese presidency’s performance on the 10 green tests

The most significant success scored by Portugal was its stewardship of the EU’s Chemicals Strategy for Sustainability and the high ambition, expressed by the Council in March, to move towards a ‘toxic-free’ environment.

However, this was undermined by mediocre progress on climate. This was reflected in the unambitious agreement on the Climate Law, which set a 2030 target for net emissions reductions of just 55% (including contentious ‘carbon removals’), when scientists conclude that cuts of at least 65% are necessary.

Farming was the area of greatest disappointment. During the dying days of Portugal’s term, the European institutions and EU member states reached a final deal on the €270-billion Common Agricultural Policy (2021-2027). Despite efforts to sell the new deal as a green victory, the CAP will continue to finance environmentally destructive farming practices.

The full assessment can be downloaded here on 1 July 2021.

The next six months will see activity around a number of high-profile environmental dossiers in the context of the European Green Deal. These include the ‘Fit for 55’ package, which aims to bring a dozen policy areas in line with the EU’s ambition to achieve a 55% net emissions cut by 2030. The EEB will be analysing the specifics of the package upon its release on 14 July 2021.

“The 10 green tests take into account our understanding that politics is the art of the possible,” explains ten Brink. “However, the future challenges of global warming and mass extinction will be impossible to deal with if we do not act now, so politicians must rethink and redefine the bounds of the possible through ambitious action.”

The details of the 10 green tests for Slovenia will be available for download here on 30 June 2021.