25 June 2021, Brussels – Europe will continue major funding of harmful intensive farming practices until at least 2027. The most contentious parts of a new €54 billion-a-year EU agriculture policy 2023-2027 have just been finalised and negotiations on the few remaining aspects will end in the coming hours, the EEB understands from sources close to the talks.

In a decade seen as crucial for reversing a range of environmental crises, a failure to shift support to ecological farming is a major policy failure, green groups said. Agriculture is a leading cause of soil loss and wildlife collapse and is a significant contributor to greenhouse gas emissions.

The existing Common Agricultural Policy (CAP) was presented as green, but drove rapid growth in the most polluting farms and wiped out millions of small farms, the EU agriculture commissioner has recently admitted. The policy has also paid large sums to oligarchs and populists.

The 2023-2027 CAP finalised by negotiators will again be presented as a win for the environment. But weaker-than-ever rules for farm payments and no meaningful environmental targets mean that around three quarters of the €270 billion farm budget will go to intensive farms, according to Europe’s largest federation of environmental groups, the European Environmental Bureau (EEB). Financial accountability has not improved either.

So-called eco-schemes have been created for the first time, worth just €7.5 billion between 2023-2024 and €9.5bn from 2025, but a discounting mechanism means fewer funds could actually be spent on eco-schemes. Control of this and all other CAP funding has been handed to member governments with a weak accountability and with a history of favouring intensive farming. Spending plans in France, Germany and Portugal suggest the countries will continue prioritising intensive farming methods at the expense of environmental protection.

Intensive agriculture is the single biggest driver of species extinction and creates 15 percent of Europe’s climate emissions. There is widespread pesticide contamination of farmland and fertile soil is being lost faster than it can regenerate in over 10% of Europe’s land area, cutting production by an estimated €1.25 billion per year. Droughts and heatwaves linked to a warming climate are increasingly hitting farm production. Ecological farming can help halt or reverse these problems and meet European food security.

EEB agriculture policy officer Célia Nyssens said: “The EU spends more on farmers than on anything else, making farm policy a powerful tool for good or for bad. We could be helping farmers restore degraded soils, adapt to climate change and rescue collapsing bee and other wildlife populations. But this new policy is a monumental failure of leadership to take on those grave threats. We are already seeing national governments planning for business as usual, to keep the money flowing to intensive farms. The European Parliament should take the rare step of throwing out this destructive deal this summer, to force a reset.” 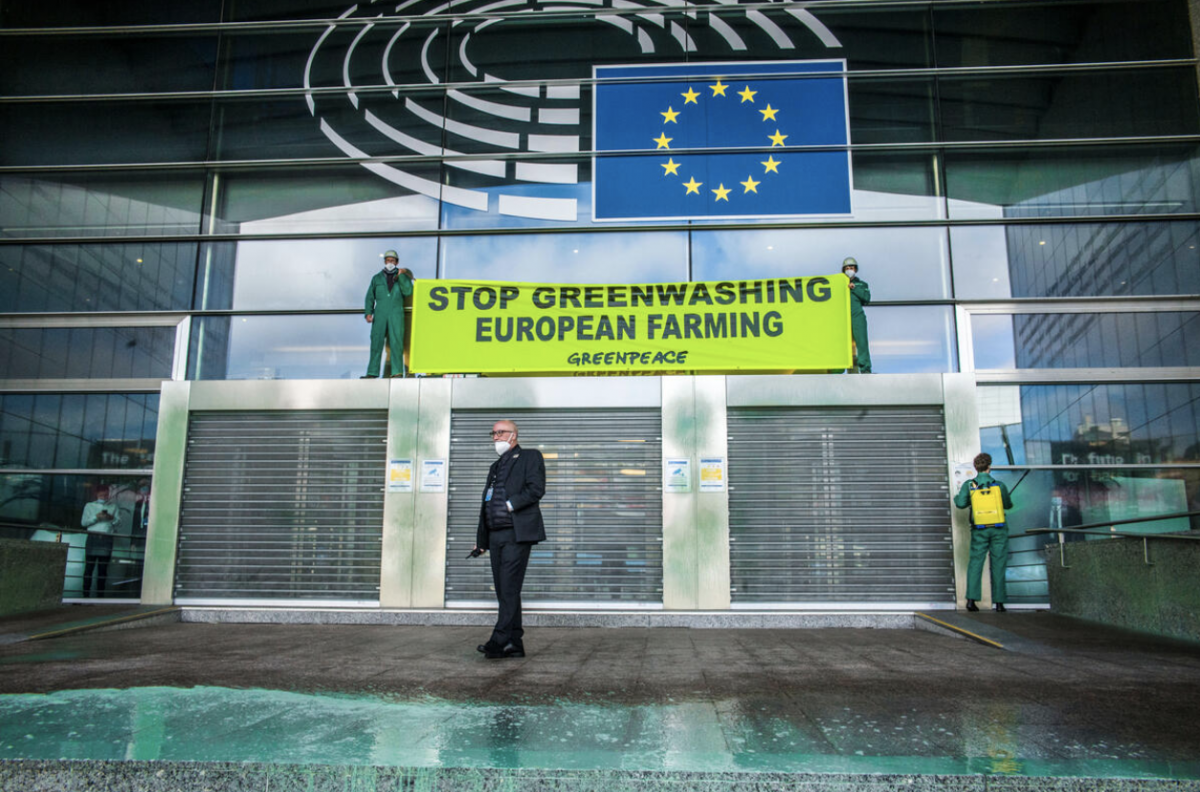 Protesters this week accused the EU of greenwashing European farming

The deal being struck by negotiators on behalf of the three main EU institutions still has to pass the European Parliament and national farm ministers, but these steps are normally a formality.

If passed, the new CAP will be a serious obstacle to nationally agreed environmental targets, including cutting European climate emissions by 55% and ending biodiversity loss by 2030. It will also clash with flagship European environmental farming targets to halve pesticides use, halve antibiotic use and halve fertiliser pollution, grow organic farmland from 8% to 25% and dedicate 10 percent of farmland to wildlife habitats.

A media briefing is available here.