The European Environmental Bureau and The Green Screen are pleased to invite you to the screening of the movie “Earth: muted” and to an online debate. 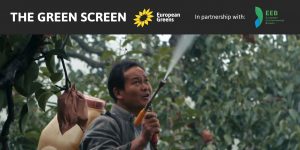 Insects provide pest control and pollinate crops, enabling farmers to produce food. They also feed wildlife allowing it to flourish. But our environment is over-polluted with pesticides and many other harmful chemicals. Because of intensive farming and its reliance on chemical pesticides, European waters and agricultural soils are heavily polluted, pollinators are declining, human health is endangered, and food security is at risk.

To protect human health and the environment, the European Commission is reforming the legislation on the use of pesticides. The legislation will include a 50% reduction in the use of chemical pesticides by 2030 and more sustainable farming practices. But the pesticides industry and agri-industry lobby are trying to boycott these objectives. The same vested interests are intoxicating the Global South by exporting pesticides that are not allowed for use in the EU. Will the European Union achieve meaningful reform of the legislation on the use of pesticides and work towards ensuring a similar level of protection for farmers, people, and nature in the Global South?

Film: available on streaming from 28 September to 4 October 2022

Book your ticket for free here. Watch the trailer at this link.

At the bottom of the Hanyuan valley in Sichuan province, China, bees are going extinct due to the widespread use of pesticides and monocultures. In this ecosystem on the brink of collapse, three farming families try to earn a living worrying about their children’s futures. Cao, Jingjing, and Ye are shown in relation to nature – in an orchard where pollinators have gone extinct, among the hives of endangered domesticated bees, and in a mountainside forest where wild bees still fly. Their stories reveal a relatable battle: the difficulty of economic survival and the problems to human and nature’s health in an environment polluted with chemical pesticides.

Pesticides use is endangering bees, farmers, and workers!

Chemical pesticides have a devastating impact on pollinators, which our agricultural production depends on. They over-pollute our environment, including agricultural soils, and are all around us: in the air, in water, in the ground and foodstuffs. Social justice and safety in the workplace must be guiding principles of EU, national and international policies. But the farmers, farm workers and their families continue to be victims of pesticides. If political inaction continues, more will fall ill and develop cancer or Parkinson’s disease, among others. The health of us and our children is at risk.

During this debate, featuring environmental, food, and pesticides experts as well as politicians, farmers and activists, we will explore what should be done about the upcoming European law on the sustainable use of pesticides (SUR) to reduce the use of pesticides and adopt more sustainable farming practices in the EU and how the EU can support other countries by, for example, banning the export of pesticides that are not authorised in the EU.