An EU-wide ban on the export of banned pesticides and hazardous chemicals:
why do EU policymakers need to act & how? 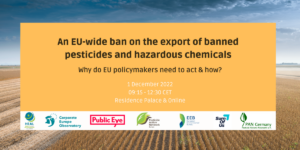 Numerous pesticides and hazardous chemicals are banned at the European Union level in order to protect human health and the environment. Yet these same products are currently produced and exported by EU companies to third countries where safety regulations are generally weaker and less strictly implemented. For instance, in 2018 alone, more than 81,000 tonnes of pesticides containing 41 different hazardous chemicals banned on EU agriculture fields, were exported to be used in other countries.

On 14 October 2020, the European Commission presented its Chemicals Strategy for Sustainability, where it  promised to “lead by example, and, in line with international commitments, ensure that hazardous chemicals banned in the European Union are not produced for export, including by amending relevant legislation if and as needed.” However, in October of this year, the European Commission shared its Work Programme for 2023 and it still does not include the promised action to stop these exports.

The European institutions and Member States need to take urgent action, and here is why and how it can be done.

This conference gathers key actors from across the world to share their concerns on the impacts that European exports of pesticides and hazardous chemicals have in third countries. It aims to urge European policymakers to open their eyes to the repercussions of such discriminatory practices and take action.

09:15 – 10:45 Session 1 The EU’s exports of banned pesticides and their impacts on importing countries

“The impact of pesticides on farmworkers in Africa” (10mins)

“The voices of the impacted communities” (25 mins)

Member of the One Health Network of Civil Society Organizations of Cameroon (ROOHCAM), Cameroon (prerecorded video)

11:00 – 12:30 Session 2 Why an EU ban on the export of banned pesticides and hazardous chemicals is needed and how to do it.

“An EU-wide export ban, what is the European Commission planning?” (10 minutes)

“Closing remarks from Members of the European Parliaments (MEPs)” (10 minutes)