Stack of plastic bottles for recycling against blue sky

The laws were formally published in the Official Journal of the EU in June. Starting today, 4 July 2018, EU countries have 24 months to transpose the laws into national legislation.

The news comes seven months after the laws and targets were agreed by the European Commission, Parliament and governments as part of the three-way negotiations known as trilogues.

EU countries will now be required to recycle at least 55% of their municipal waste by 2025, 60% by 2030 and 65% by 2035. Other approved measures include  a 10% cap on landfill by 2035, mandatory separate collection of biowaste and stricter schemes to make producers pay for the collection of key recyclables.

Recommandetions also include economic incentives for reuse, deposit-return schemes, food donations and the phase-out of subsidies that promote waste.

Below is a table outlining the major agreements. Read here for more information or contact the EEB to learn more. 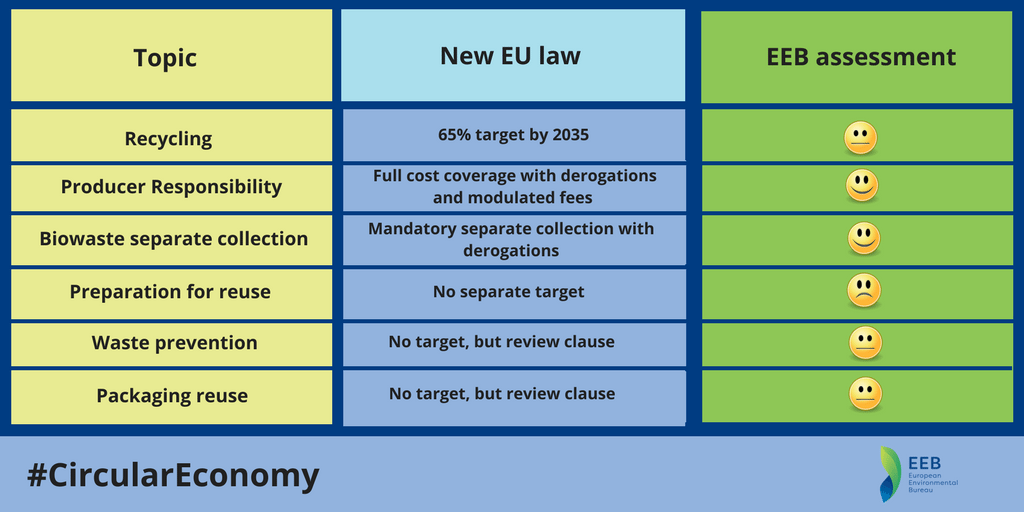 “Cities across Europe have already made steps forward to reduce waste and improve recycling. The new laws could have been more ambitious, but their successful implementation will help governments consolidate this progress with benefits for the people and society as a whole.”

“After years of discussions, it is now time for EU countries to walk the talk on waste reduction. These laws are necessary to tackle some of the world’s most pressing issues such as pollution in our cities and environment.”

In May 2017, we asked government officials whether they supported the new, more ambitios proposals. Member states failing to disclose their position were shown in red on the map.

Unlike amendments and votes in the European Parliament, where discussions are recorded and publicly available, inter-institutional negotiations take place behind closed doors. In many cases, EU citizens are prevented from knowing the position of their governments–let alone joining the debate.

Our aim is to promote an open and transparent process of decision making at the EU level, and a full transition to a circular economy.

Click on the map to find out which countries were opposing the new EU waste laws during the negotiations.

If you have trouble opening the map, please use Google Chrome.