Environmental campaigners have taken legal action against Serbia’s state-owned electricity company EPS for exposing Serbian and EU citizens to toxic gases six times above the legal limit, in breach of both national and international law. The challenge was started by Serbian NGO Renewables and Environmental Regulatory Institute (RERI).

Serbian thermal power plants are among Europe’s biggest emitters of sulfur dioxide (SO2)[1], and a public health and economic liability for the whole continent. SO2 emissions from EPS’ plants travel long distances and pose a significant threat to human health and the environment in Serbia and beyond. Modelling data show that over half of the premature deaths caused by emissions from Western Balkan coal power plants in 2016 occurred in the EU, as the effects were felt as far as Germany, France and Spain[2].

As a party to the Energy Community Treaty, Serbia is legally required to reduce pollutants emitted from its thermal power plants below the legal levels in the National Emission Reduction Plan (NERP)[3]. However, in 2018 and 2019 ten of EPS’s thermal power plants emitted respectively 336,000 and 309,500 tonnes of SO2 – six times above the NERP’s annual limit of 54,000 tonnes. EPS’ Kostolac and Nikola Tesla plants alone emitted more SO2 than Bulgarian, Czech, French and Polish plants combined.

Jovan Rajić, RERI’s Lead Attorney said: “The obligation for Serbia to implement the NERP, and for EPS to comply with annual emission ceilings, has been clear and indisputable since January 2018. It would contribute to the reduction of harmful health impact to the citizens of Serbia and EU as well. This lawsuit is to secure proper implementation of the NERP and to strengthen accountability mechanisms for reduction of pollution from thermal power plants.”

Serbia’s difficulties to comply with the NERP ceilings are also concerning for the country’s negotiations to access the EU, as the limits set under EU law are significantly stricter.

Last week, 26 members of the European Parliament warned about the cross-border environmental damage caused by Chinese-financed heavy industry projects in Serbia, including EPS’ Kostolac. The MEPs urged the European Commission to remind the Serbian government to respect its national legislation as well as EU rules as pertains to the accession process[4].

Riccardo Nigro, Campaign Coordinator on Coal Combustion and Mines at the European Environmental Bureau, said: “Air pollution knows no border, and the toxic fumes that come out of Serbian power plants are an European issue. As this year’s President of the Energy Community and a candidate to join the EU, Serbia must ensure the Treaty is respected, and hold EPS accountable.” 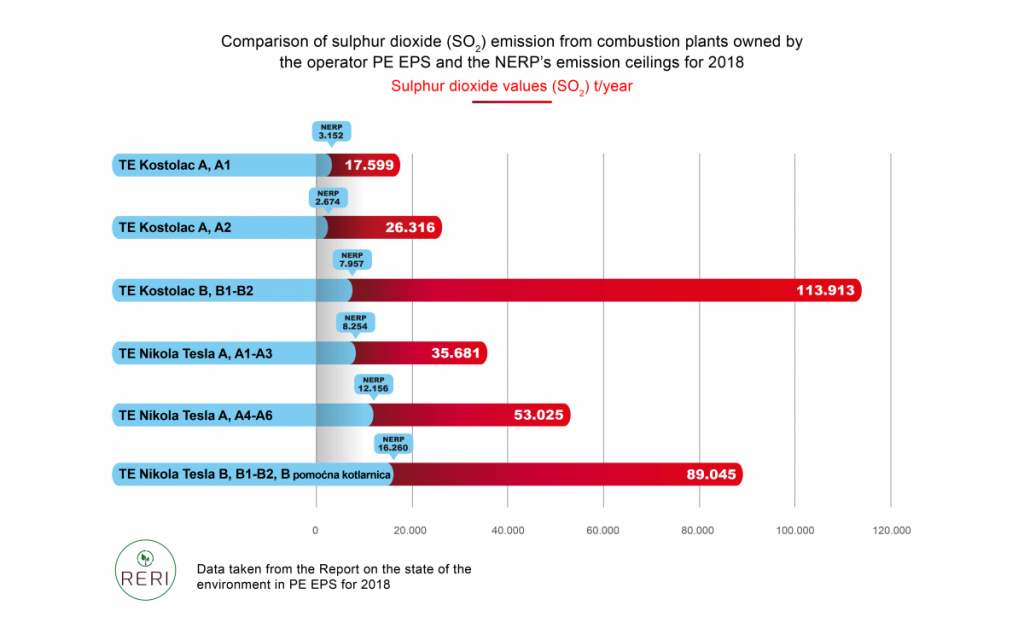 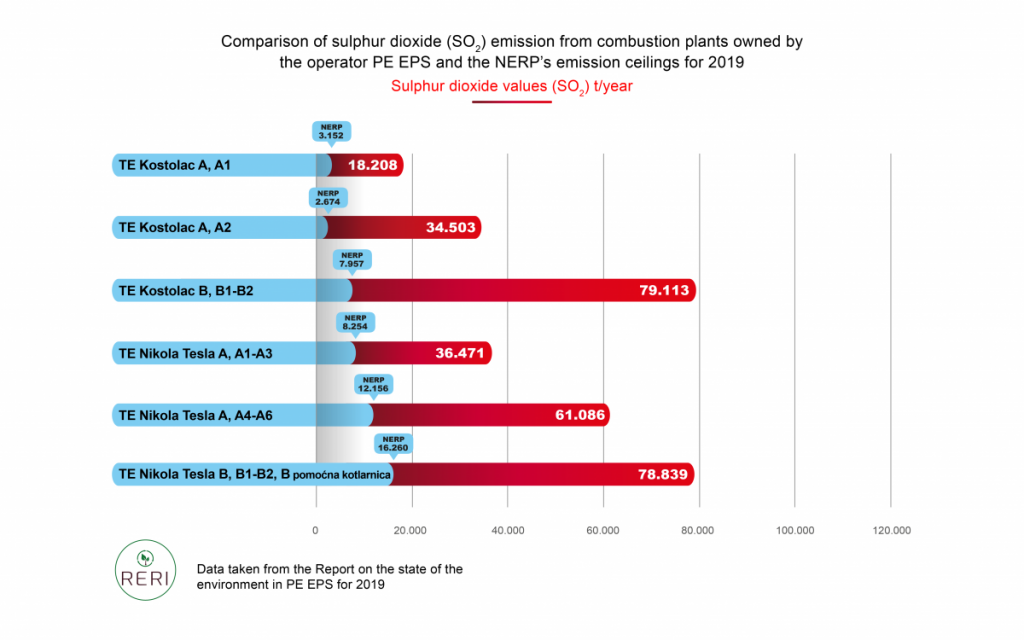 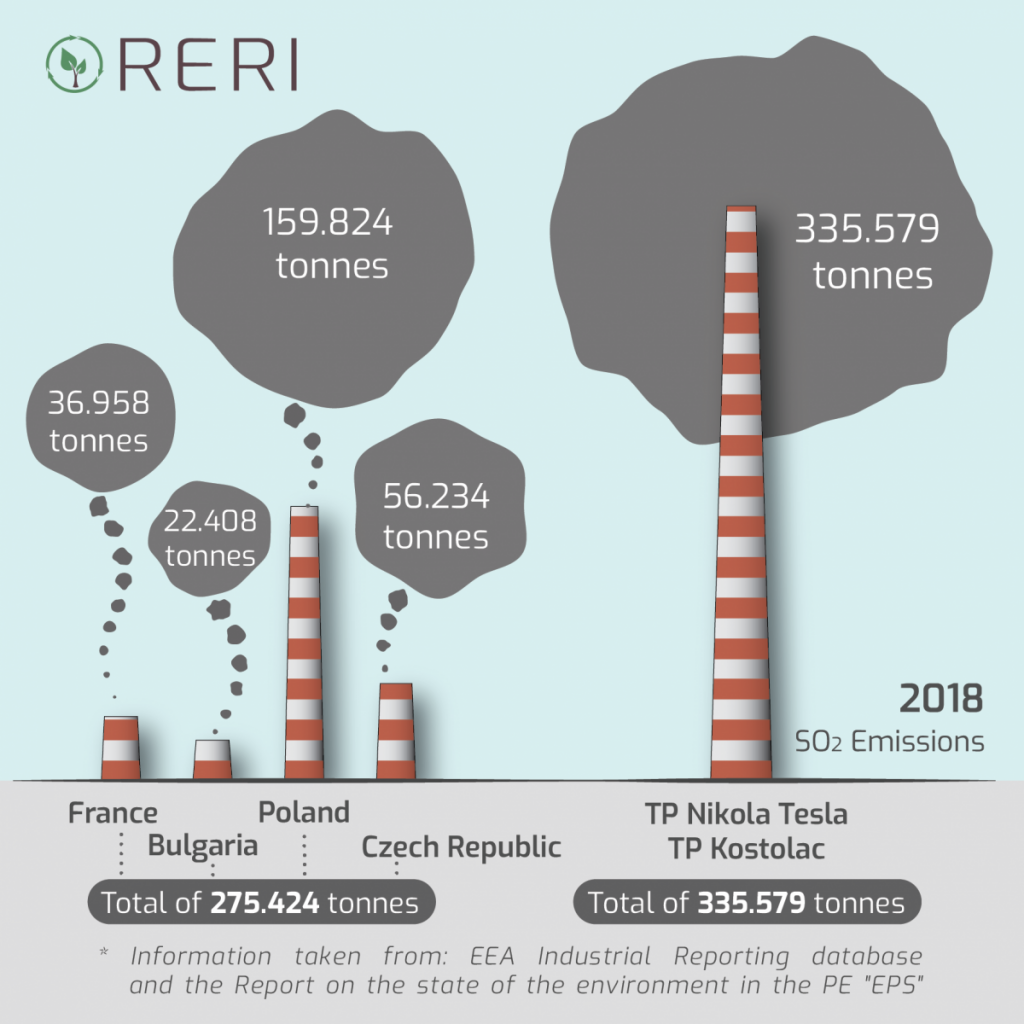 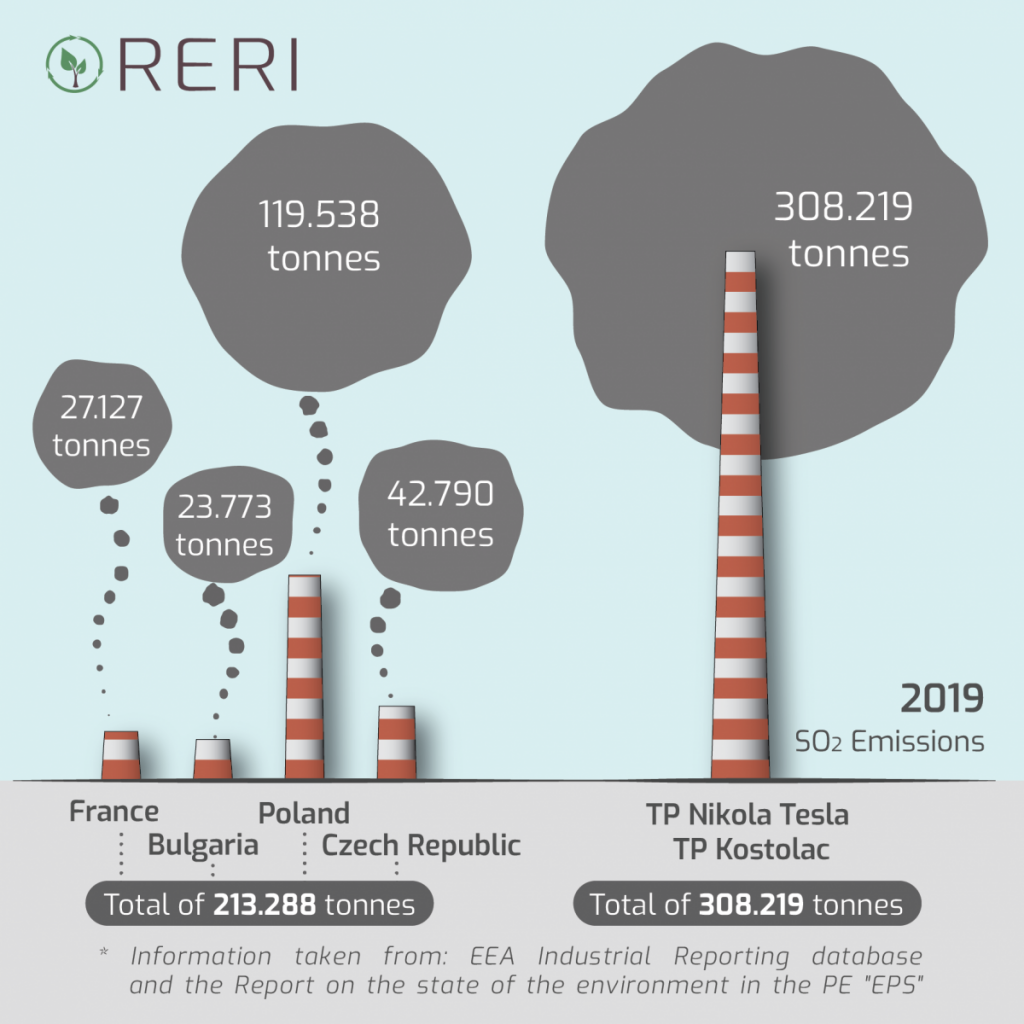 [1] SO2 is a harmful gas released when burning coal, which contributes to the formation of acid rain and particulate matter (PM). Kostolac B thermal power plant is the largest single SO2 polluter in Europe, which in 2018 emitted 79,113 tons of SO2, over 25,000 tonnes higher than the total annual SO2 limit for all twelve of Serbia’s Public Electricity Company’s (EPS) thermal power plants. Serbian thermal power plant Nikola Tesla is also among the top 10 SO2 polluters in Europe.

[2] 380 of these premature deaths happened in Romania and 370 in Italy. Chronic coal pollution in the Western Balkans also harmed European productivity with an estimated total of 3,047 hospital admissions and over 1.16 million lost working days in the EU and Western Balkan countries during 2016. In the EU alone, the total was 1,418 hospital admissions and over 600,000 lost working days. Source: https://beyond-coal.eu/wp-content/uploads/2020/02/FINAL-Chronic-Coal-Pollution-report.pdf

[3] A National Emission Reduction Plan is the plan that the Energy Community Contracting Parties can implement instead of complying with emission limit values for SO2, NOx and dust at the individual plant level. NERPs shall be applicable to predetermined combustion plants, whose cumulative emissions of polluting materials should not exceed the emission ceilings prescribed by the plan for a certain year. The NERP shall reduce the total annual emissions of the pollutants covered by Directive 2001/80/EC from existing plants to the levels that would have been achieved by applying the Directive’s emission limit values to the existing plants.