Rather than steering the market towards the Paris Agreement goal of limiting global warming to 1.5 °C, the European Commission is making harmful concessions to industry polluters and undermining its own climate ambition, says the EEB in their early reaction to the second FitFor55 EU package.

The European Commission takes an important step today in the European Green Deal journey, with the release of the second part of the Fit For 55 package.

Aimed at getting the EU on track towards the 55% emissions reduction target by 2030, the legislative package presented by Von Der Leyen’s executive contains significant merits, once again marred by compromising trade-offs with the fossil industry.

“This package was crucial to accelerate the transition towards a decarbonised energy system while bringing two highly polluting sectors, buildings and agriculture, in line with the EU Green Deal. Yet the Commission has ceded ground to industry polluters, giving them a chance to greenwash their fossil business and emissions”, said Patrick the Brink, Deputy Secretary General and Director of EU Policy at the EEB. 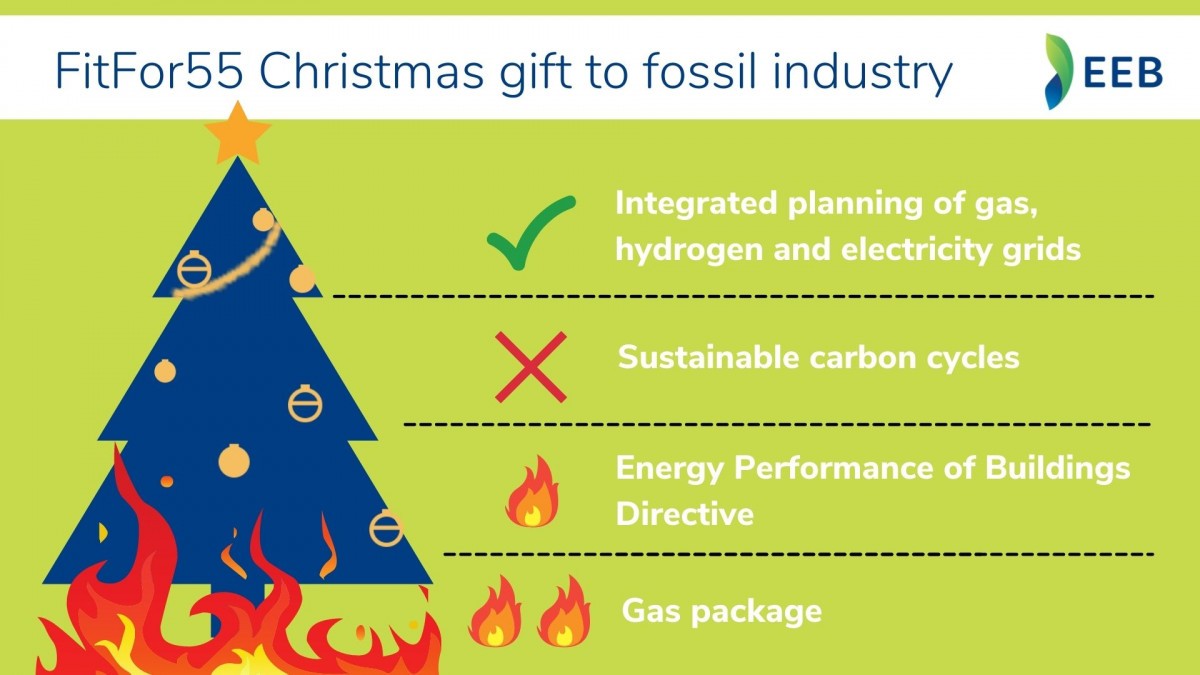 Fossil industry managed to lock-in our homes to gas for decades when renewable heating alternatives are available and ready to replace gas boilers, thanks to the open acceptance of blending gas solutions in the Third Gas Package. Moreover, the revision of the Energy Performance Building Directive may allow construction companies to dodge the ‘polluters pay’ principle as it fails to effectively address circularity and the embedded emissions from construction materials and their transport.

NGOs are also critical about the two most promising package pieces for reducing greenhouse gases, the one on carbon cycles and methane emissions, which fall very short of ambition and carry out major bottlenecks.

The text presented on “restoring sustainable carbon cycles” aims at boosting technological and natural solutions to remove carbon from the atmosphere. While this is an important part of the needed climate action, the Commission is throwing the door open to carbon offsets that would allow big polluters to claim ‘climate neutrality’.

“Treating carbon emissions and carbon removals as simply interchangeable is a zero-sum game”, said Célia Nyssens, Policy Officer for Agriculture at the EEB.

The scope proposed for the new methane regulation is so narrow that only covers about 19% of methane emissions in the EU, those coming from the fossil gas sector, while the major methane-emitting sectors, livestock and waste management, remain unaddressed. Methane’s impact on climate change is 84 times greater than CO2, and only air pollution from methane caused 14,000 premature deaths in the EU in 2016.

On a positive note, we welcome the joint planning at the national level of electricity, gas and hydrogen networks, which should hopefully help to phase out redundant gas from sectors where renewable electricity can quickly cut emissions and better target investments.

Davide Sabbadin, Policy Officer for Climate and Circular Economy at the EEB, said:

“The objective of this package should be to favour targeted use of 100% renewable hydrogen in those sectors where this is badly needed. Blending and the equal treatment of zero-emissions renewable hydrogen and the so-called low carbon one are serious flaws: Gazprom and the gas industry will be rubbing their hands with glee while Europe becomes more dependent on partly decarbonised-fossil gas and its volatile prices”.

Gonzalo Sánchez, Policy Officer for Carbon Neutrality in the Building sector at the EEB, said:

“A Whole Life Carbon approach and circularity are essential to decarbonise our built environment, and must be effectively included in the EPBD with no further delay. If we miss this once in a lifetime opportunity, we will have a huge increase in product related emissions today, and a waste problem in the future.”

Célia Nyssens, Policy Officer for Agriculture at the EEB, said:

“We need not only to increase our natural carbon sinks, but also to restore ecosystems and facilitate a transition towards agroecology. The ‘Carbon Farming initiative’ was an opportunity to start a conversation about a different model for agriculture, moving from exploiting and degrading, to restoring our soils and ecosystems. Instead, the Commission is narrowing ‘carbon farming’ down to carbon offsets. This is a dangerous path that could lead to greenwashing and false solutions.”

Download the EEB Assessment Of The Carbon Cycles Communication On Carbon Farming.