Stand up for your Right to Repair

Junked crts computer monitors, tvs and old printers for recycling or safe disposal recycling, any logos and brand names have been removed. Great for recycle and environmental themes.

Tired of wasting money on products that don’t last? Help us put an end to the “throwaway” culture. Sign the petition below and share this message.

Every day we buy products that are designed to break.

Manufacturers are making it increasingly difficult and expensive to repair our electronic gadgets and replace key parts like a cracked screen or a weak battery.

By reducing the lifespan of a product they may drive sales, but this comes at the expense of citizens and the planet.

The world is not prepared to deal with the increasing amounts of potentially toxic electronic waste. Dumpsites are overflowing. Recyclers can’t keep up. The United Nations warned of a major threat to the planet and human health.

We’re depleting the world of finite resources to buy things that are meant to become waste. Things we could repair or upgrade instead.

Governments can change this – with our help

The European Commission has proposed rules for manufacturers to make our gadgets and home appliances more durable and easily repairable.

The proposed laws would require that products can be disassembled and reassembled again with designs that allow an easy access to the parts that could break. They would also require manufacturers to make replacement parts, instructions and tools available, while special provisions would improve durability and recycling.

But despite the economic and environmental benefits, some governments are set to reject the proposals.

This would mean business as usual for the whole of Europe. In short, you’ll keep wasting your money while the planet turns into a huge, toxic dumpsite.

Tell your government you want longer lasting and repairable products. Sign the petition for our Right to Repair here:

Is your country supporting or opposing the proposals?

We mapped your country’s position on the proposed laws. Check out the map and help us spread the message.

What is the Right to Repair?

Tech companies and manufacturers don’t want you to fix or upgrade your gadgets.

For example, Apple recently apologised for deliberately slowing down some iPhones through a software update coinciding with the release of a new model.  Yet it’s increasing the price for repairs – again.

People have had enough. 77 percent of EU consumers would rather repair their goods than buy new ones (Eurobarometer 2014).

From the US to Europe, we are reclaiming our right to repair. We demand easy access to information, spare parts and repair tools. We want a better product design that makes repair possible at a reasonable price.

Repair is as important as innovation (the Economist 2018) and it may be the only way out of a major environmental and health disaster.

For now, the EU proposals mostly concern dishwashers, washing machines, fridges, lights, TVs, displays and servers. But campaigners say that this can be the beginning of a new era for product design – one that truly cares for people and the planet. 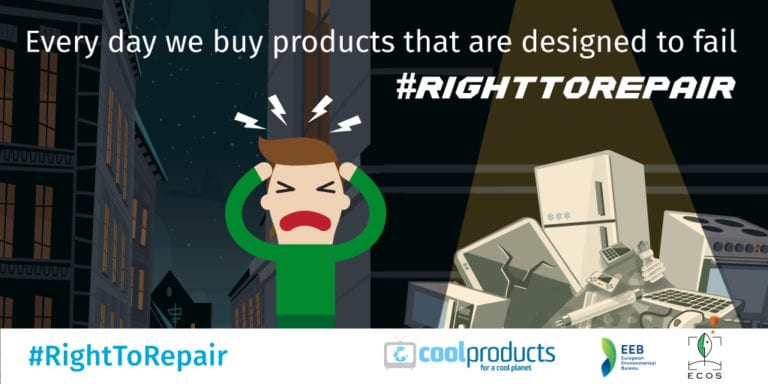