France, Germany, Italy, Spain, the UK and four other countries should this week expect to be sent to Europe’s top court for their failure to tackle toxic air pollution. Documents obtained by the EEB reveal that government proposals lack the “credible, timely and effective” measures demanded by the European Commission.

This Q&A provides some essential background ahead of this week’s announcement.

Where can I see government proposals?

The EEB, together with our member groups in a number of countries, submitted access to information requests to get hold of the letters and other documents ministers sent following a meeting of Environment Ministers in January.

Proposals from the German and French governments were already publicly available and the Italian, Slovak and Hungarian governments shared the information requested.

However, the governments of Spain, the UK, Romania, the Czech Republic, and the European Commission, all refused to share the relevant documents.

The UK government even argued there was a “strong public interest” to withhold the information to increase the chance of defeating the Commission’s case.

“Governments have been promising to tackle toxic air pollution for decades and patience has run out. Unfortunately for people all over Europe, none of the documents we’ve seen contain the ‘credible, timely and effective measures’ the Commission has demanded. They’re all too little, too late. The lack of transparency and the lack of effective proposals is unacceptable. All nine governments should now be sent to court to be held accountable for their failure.”

In February 2017 five Member States were given final warnings for persistently breaching EU air quality limits. In January this year, ministers from nine countries were summoned to Brussels to explain their failure to act. They were given an ultimatum: either write to the Commission detailing “credible, timely and effective measures” for improving air quality, or face being sent to court.[1]

What does the EEB think of the published proposals?

We have prepared an assessment of the available proposals: 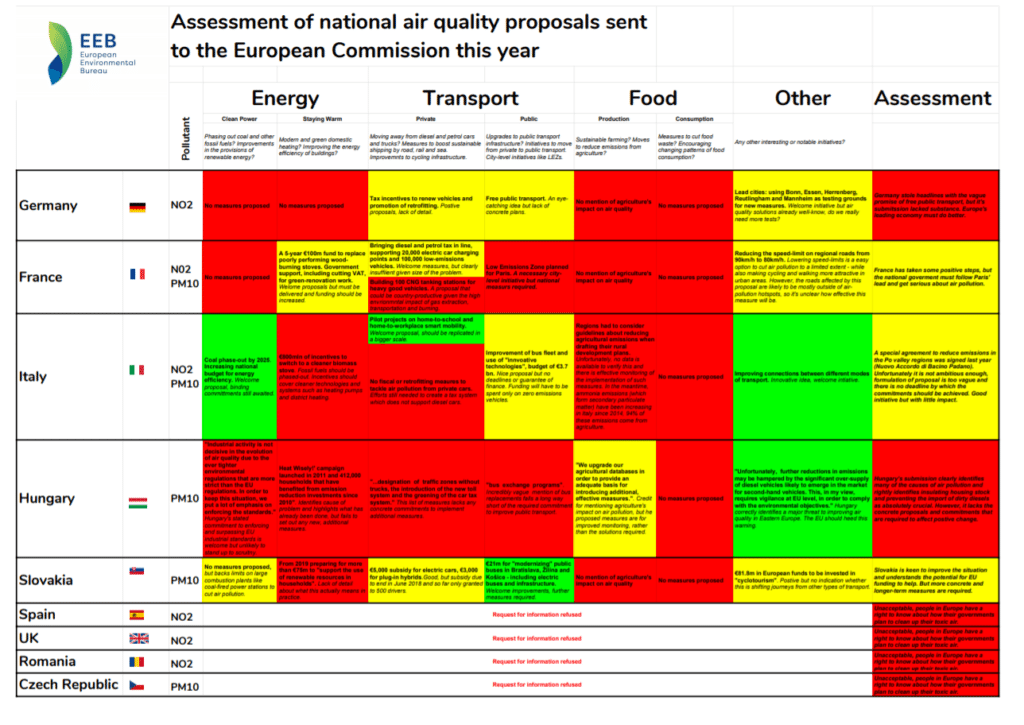 Based on the publicly available information, none of the countries facing infringement proceedings have demonstrated that credible, timely and effective measures have been taken.

Air quality infringements continue to occur in all nine countries.

The European Commission should therefore send all nine governments to the ECJ.

What type of air pollution do these cases concern?

What causes this pollution?

In Eastern Europe, the burning of various fuels to heat homes is responsible for much of the particulate matter in towns and cities, but large-scale industry, industrial agriculture and coal-fired power plants provide a baseload of air pollution across Europe.

NO2 pollution is especially linked to dirty diesel cars but is also emitted in large quantities by industry and coal-fired power stations.

What are its effects?

PM10: “There is a close, quantitative relationship between exposure to high concentrations of small particulates (PM10 and PM2.5) and increased mortality or morbidity, both daily and over time. Conversely, when concentrations of small and fine particulates are reduced, related mortality will also go down – presuming other factors remain the same. This allows policymakers to project the population health improvements that could be expected if particulate air pollution is reduced.”

NO2: Epidemiological studies have shown that symptoms of bronchitis in asthmatic children increase in association with long-term exposure to NO2. Reduced lung function growth is also linked to NO2 at concentrations currently measured (or observed) in cities of Europe and North America.

What should governments do to improve their air?

Serious action is required to reduce the environmental impact of energy, food and transport.

Energy systems need to be based on clean, renewable energy that can deliver commitments made under the Paris climate agreement. Reducing wasted energy through improved efficiency and better designed products will also be essential. Higher EU targets are required and Europe must move beyond coal before 2030.

We also need a sustainable food system with steps taken to reduce emissions at all stages from production to consumption. A reformed common agricultural policy must work in harmony with nature, not against it.

Emissions from transport must be addressed, cutting subsidies for diesel cars and taking the most polluting vehicles off of our streets. Effort must be made to encourage a move to zero-emissions transport and to develop improved infrastructure that’s fit for the 21st century.

Where can I find more information about the air quality infringement story?

The EEB has been following these cases for years. This chronological list of press releases tracks the story over the past 15 months:

Air quality ruling it tip of the iceberg, 5 April 2017
The EEB welcomes the ECJ judgement on Bulgaria’s illegal air. The ruling sends a warning signal to at least 18 other countries, including France, Germany, Italy, Spain and the UK, that are failing to ensure their citizens breathe clean and healthy air.

‘Toxic bloc’ summit welcome, but no substitute for legal action, 19 January 2018
Environment ministers from nine EU Member States are being hauled to Brussels to answer questions about their failure to cut air pollution. European Commissioner Vella will meet ministers from the Czech Republic, Germany, Spain, France, Italy, Hungary, Romania, Slovakia and the United Kingdom at a special mini-summit next week.

Polish air quality ruling is warning to ‘toxic bloc’ governments, 22 February 2018
The European Court of Justice (ECJ) has ruled against Poland for persistently breaching EU air quality limits and failing to act quickly enough to improve the situation. The ruling sends a strong message to nine other Member States that have been issued final warnings by the European Commission.

Delays and secrecy surround governments’ plans to tackle air pollution, 28 March 2018
Government plans to tackle Europe’s air quality crisis are either being deliberately kept secret or are ‘completely inadequate’, air quality campaigners have concluded after a series of access to information requests.