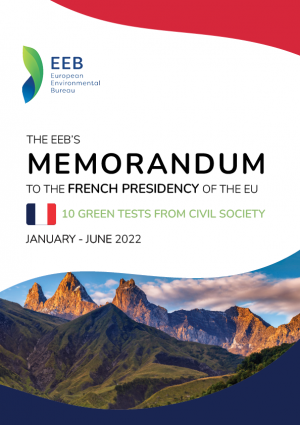 This memorandum is directed to the French government, taking over the Presidency of the Council of the EU from January to June 2022, following the Presidencies of Slovenia, Portugal and Germany.

This six-month period will be critical for Europe: the French leadership will be required to work on high-profile dossiers, including the Fit for 55 Package, which reforms a dozen policy files to increase the EU’s 2030 climate target, and the Zero Pollution Action Plan, which has water, air and soil at its core.

We hope to witness significant progress on commitments addressing the climate and biodiversity crises; see opportunities being seized to advance circular economy, the rule of law and governance in the EU; and see global diplomacy on the European Green Deal being promoted.

To guide the French Presidency when tackling the most pressing environmental issues and evaluate the Presidency’s performance during its term, the EEB uses its ’10 Green Tests’ as a green yardstick to measure environmental progress.

Read more in our press release on the French Presidency and the Trio Presidency of France, the Czech Republic and Sweden.

Comments on the draft report for IMCO on Construction Products Regulation