EU ignored € billions in consumer losses and its own legal benchmarks

9 July 2021, Brussels – Millions of homes and businesses are paying higher energy bills than they should because EU officials have allowed the world’s largest light bulb maker to cash-in on environmentally harmful old technologies that should by law have been banned years ago.

Signify/Philips presents itself as an environmental champion, but has made hundreds of millions of Euros in revenues from the most environmentally harmful lamps, actively following a business strategy described by executives as a “cash engine” for at least five years, company documents show. The European Commission should by law have removed inefficient and toxic fluorescent lamps from sale as far back as 2018, when its own experts confirmed the legal conditions for a market ban were met. Their continued availability will cost bill-payers an estimated €16.8 million per day in lost efficiency savings for the next 2 years, according to new NGO estimates. Signify was a key part of lobbying in Brussels to delay the market ban, a slow process that finally got started last month.

The European Environmental Bureau (EEB) reviewed Signify shareholder reports and discovered a long-running business approach the company calls its “last man standing strategy”. This is a plan to remain the last producer of highly profitable fluorescent lamps. Hundreds of millions of the curly or linear-shaped tubular bulbs are still used in European homes and businesses, despite the fact they typically use double the electricity of LED alternatives for the same amount of light. Over 90% of all fluorescent bulbs can be replaced with a ‘plug and play’ LED, like-for-like products needing no specialist installation. 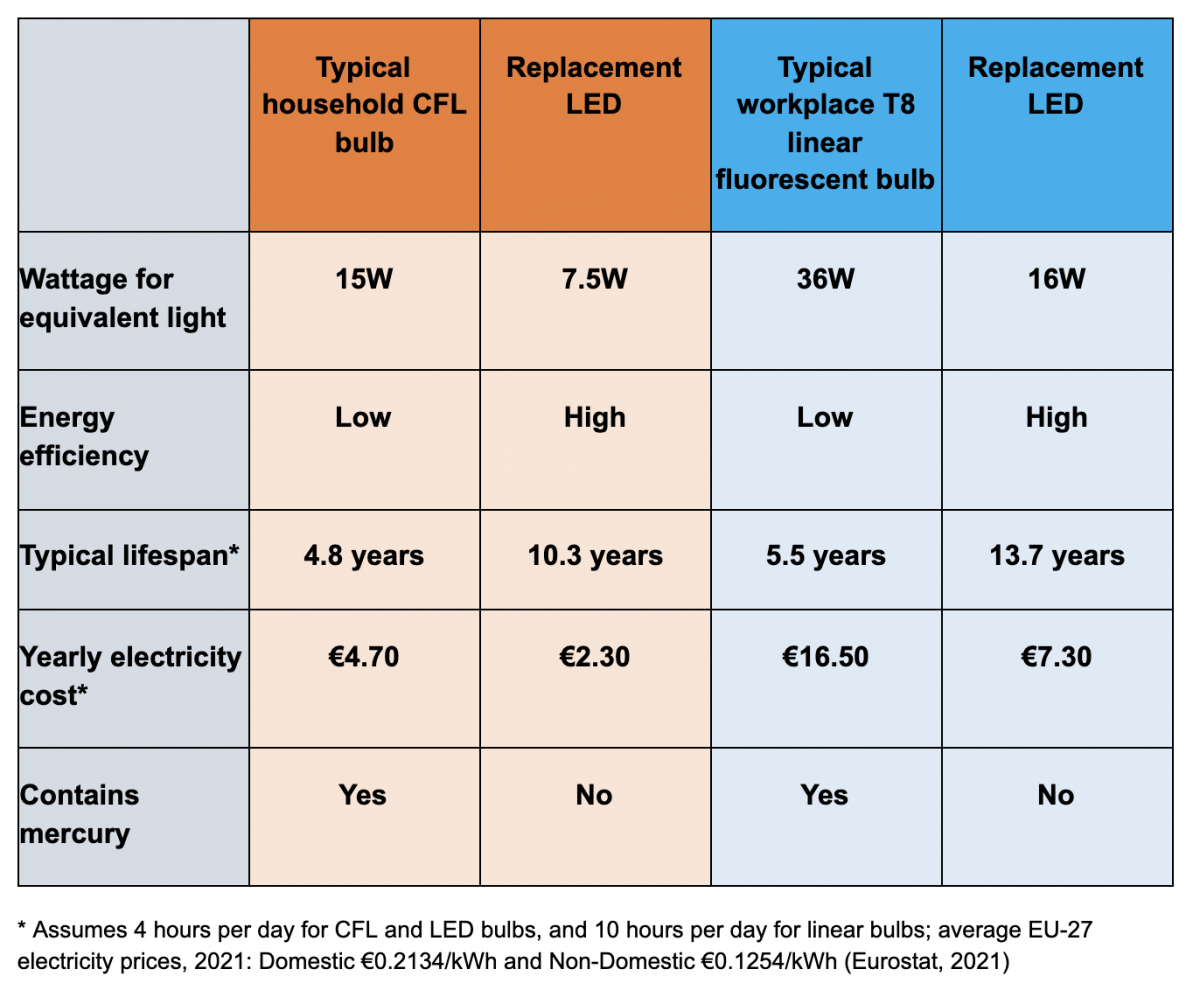 Fluorescent lamps contain mercury, a powerful neurotoxin that can quickly spread in the environment. Over half (see page 30) the glass bulbs are thought to break and leak mercury during improper waste handling in Europe. The World Health Organisation puts mercury in the top ten most problematic chemicals for public health.

Greenwash
Signify presents itself as an environmental champion. Prominent on its global website is the claim: “Our innovations contribute to a safer, smarter more sustainable world.” It is a member of the UN Global Compact and the UN Business Ambition for 1.5C. Signify’s LED slogan is “Real pros say farewell to fluorescent.” But Signify shareholder reports from 2017 to 2020 show that it has actively and successfully expanded its market share and profitability of fluorescent and other types of the most inefficient lighting technologies. Experts for the Commission estimate that without a ban, fluorescent lamps in Europe will consume over 309 terawatt hours of electricity over 15 years, equivalent to Italy’s entire annual electricity consumption.

Signify’s 2020 annual report boasts of being the “global market leader” in the most power hungry lamps, including incandescent bulbs that typically convert some 90% of electricity into waste heat. It has a “focus on winning market share”. “The Division is successfully executing its last company standing strategy, strengthening its leadership position by continuously gaining market share, increasing customer and employee Net Promoter Scores and delivering cash,” the report says.

Signify staff led lobbying efforts to delay regulatory bans of the most inefficient and toxic lamps in Europe and the developing world [1]. The EU agreed to the delays, despite evidence of consumer and environmental harm presented by its own experts.

Maladministration
By law, the Commission should have removed all the major categories of fluorescent bulbs from stores by 2018. Its own experts confirmed that LED replacements were sufficiently available, reliable and affordable. Six criteria established in law (Article 5.1.a) were sufficiently met, they confirmed. But the Commission only acted in mid June 2021, when it proposed banning the major categories of fluorescent lamps: most T5 and T8 models and most CFL bulbs. Public consultation on the first main lamp groups ends on 16 July.

EEB policy manager Elena Lymberidi-Settimo said: “Officials sat on their hands for 5 years allowing these lamps to stay on the market, despite knowing their environmental and health impacts. They badly let down citizens and the environment, apparently to favour corporate interests. In exposing those business interests today, we hope the Commission feels the pressure to fast-track the phasing-out of this old technology. We urge people to add their voice to the public consultation and have created a webpage to help them.”

Consumer and environmental harms
A report, published today by the energy performance organisation CLASP, estimates that consumers will pay €16.8 million per day more in electricity bills for the next two years than they should because of the EU’s failure to ban fluorescent lamps in 2021. Over a tonne of mercury use would have been prevented, it estimates. 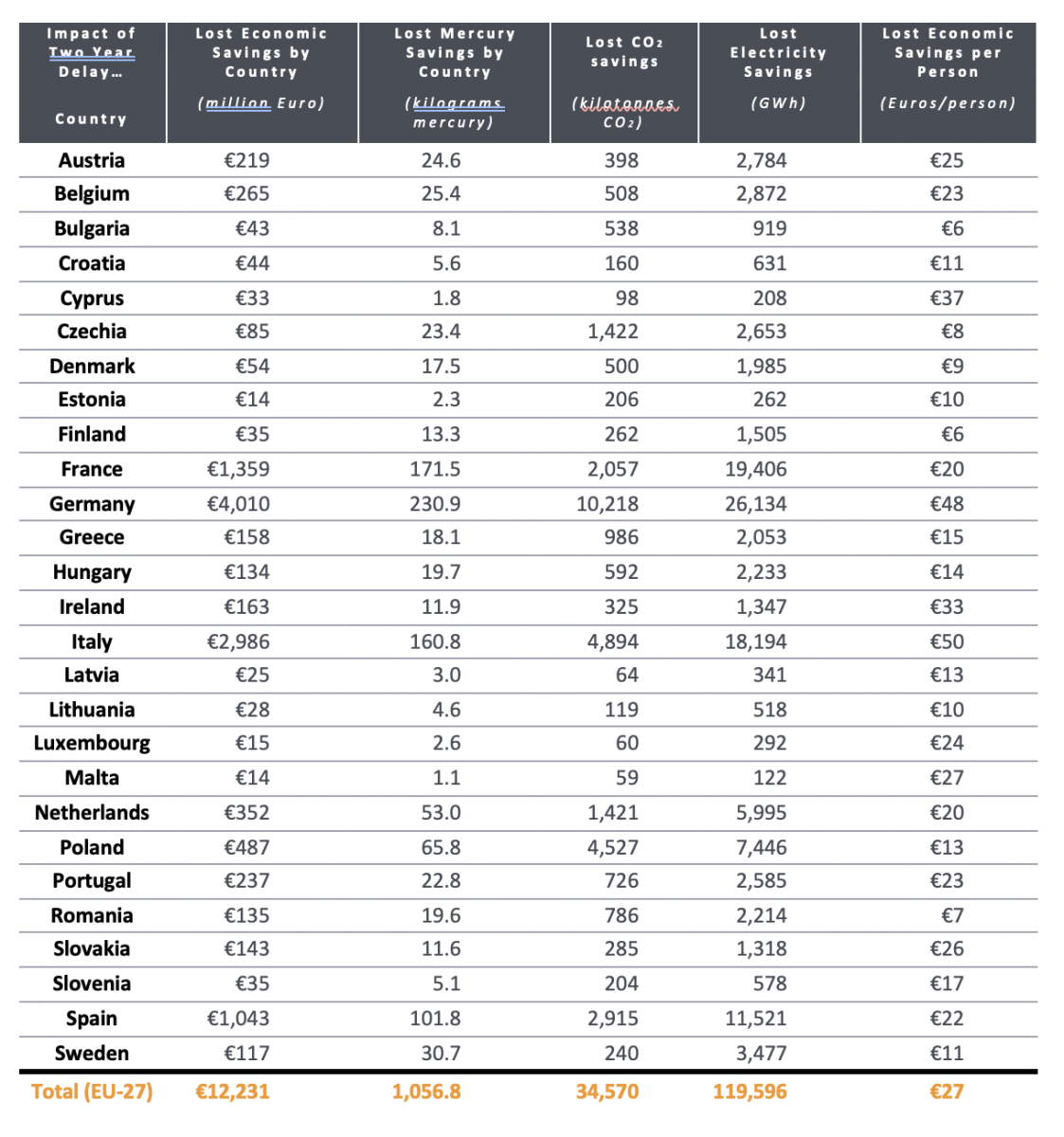 CLASP senior advisor Michael Scholand said: “Every day the EU fails to remove toxic, inefficient lighting from our homes and communities, the interests of citizens are harmed. These lights not only raise our energy bills, but pose a risk to our health. LED technologies have far surpassed even the most advanced mercury-containing fluorescent bulbs. There is simply no justification for keeping fluorescent lamps on the market.”

Since this article has been published Signify has responded within The Light Review and we have followed up with a rebuttal in our European Environmental Bureau challenge Signify’s contradictory claims article.

Notes
[1] In Europe, Signify staff present themselves as members of the lobby association LightingEurope when they attend stakeholder meetings arranged by the European Commission to discuss proposed regulatory bans of lamps under the ROHS Directive. The EEB attends the meetings and witnessed Signify staff demanding long delays to the bans.

Outside Europe, Signify staff, again acting as LightingEurope, joined an expert group created as part of the Minamata Convention on Mercury to inform governments around the world on lighting products. The EEB is also part of the group and, in a meeting last year, witnessed Signify arguing vigorously that LEDs were not ready to replace fluorescent lamps, despite Signify websites demonstrating the contrary. Its arguments are reflected in its formal submission.

Signify was a member of United 4 Efficiency, a UN programme focused on helping emerging economies reduce energy consumption. It quit the programme in 2020, a few weeks after losing a struggle over fluorescent bulbs. A Signify staff member was the sole voice arguing not to make LEDs the single recommended technology in a Model Regulation project. In its resignation letter, seen by the EEB, it argued that fluorescents should be given more time and that the LED market share is growing fast enough without the need for policy intervention. NGOs say tens of billions of Euros in global annual electricity savings deserve policy intervention.