Finland’s presidency of the EU, in the second half of 2019, performed well on the circular economy, chemicals and wellbeing, and made significant efforts on climate, biodiversity and water. It did poorly on agriculture and the EU Budget. This was the conclusion of an environmental scorecard prepared by the European Environmental Bureau (EEB).

The Finnish Presidency of the EU, which lasted from 1 July to 31 December 2019, was guided by considerations of sustainability, as reflected in the presidency’s programme titled ‘Sustainable Europe – Sustainable Future’.

Among Finland’s top priorities at the EU’s helm was to make the European Union a global leader in climate action, with its flagship initiative in this regard to make the Union completely climate neutral by 2050. Other actions Finland foresaw included expanding the circular economy to new sectors, promoting the sustainable use of natural resources and protecting biodiversity.

The EEB, in collaboration with the marine protection umbrella group Seas at Risk, drew up a blueprint for action in the form of Ten Green Tests upon which Finland would be assessed at the end of its six-month term.

The outcome of that assessment is largely positive, showing what an EU Presidency can achieve given political will, though there were also some weaker points.

“The Finnish presidency made significant efforts, and in some cases achieved good results, in the key areas of climate, biodiversity, water, chemicals and circular economy among others, indirectly supporting the emergence of the European Green Deal,” observed EEB Secretary General Jeremy Wates. “On agriculture and the EU budget, the presidency could have done better and the outcomes were disappointing. But, overall, the Finns demonstrated the constructive role that an EU presidency can play when there is sufficient political commitment.”

“Finland is aware of the environmental challenges facing Europe and the world and strove to rise to them during its presidency with an ambitious green agenda,” said Jouni Nissinen of the Finnish Association for Nature Conservation, who served as EEB president during most of the Finnish Presidency and is currently the Finnish board member. “Despite certain weaknesses and some poor results, Finland’s presidency was one of the better ones on the environment in recent years.”

Below is a summary of the 10 areas of assessment and how the Finnish Presidency fared: 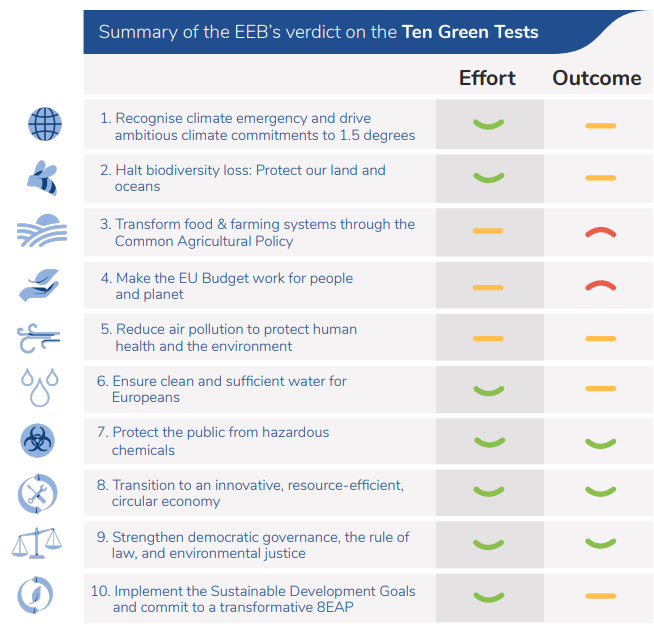 The full assessment is available here.