EU governments have taken a small step towards cutting waste and greenhouse gases from manufacturing of popular consumer goods.

For the first time, manufacturers will be obliged to make appliances more easily repairable and longer-lasting as a result following a decision by national representatives.  The measures will enter into force as of April 2021 and will apply to lighting, displays, washing machines, dishwashers and fridges.

The decision is part of the EU’s Ecodesign Directive, which removes the most wasteful products from the market, replacing them with units that do the same job with less energy and resources.  [1] They will now have to be officially adopted by the European Commission in 2019.

This is good news for the environment and consumers, according to the EEB and ECOS, which lead the Coolproducts campaign and advocate for the right to repair in Europe alongside thousands of independent repairers and national groups.

“The agreement is a step in the right direction.

“From the US to Europe, people are demanding their right to repair the things they own because they’re tired of products that are designed to break prematurely. Enabling consumers to repair and reuse all electronic products is just common sense.”

However, repair professionals are set to retain control of most repair operations. The new laws will require producers to make most spare parts and repair manuals available to professional repairers only. This may restrict the access of independent repairers, repair cafés and consumers to some key replacement parts and information, limiting the availability and affordability of repair services.

Stephane Arditi of the EEB said:

“When repair activities stay in the hands of a few firms, we’re missing an opportunity to make it more affordable and readily available.

“Small independent repairers can make a great contribution to the economy and our society. We need to help them do their job.”

In November, NGOs denounced strong pressure from industry lobby groups, which prompted the European Commission to water down the proposals on repairability in favour of recyclability. [2] 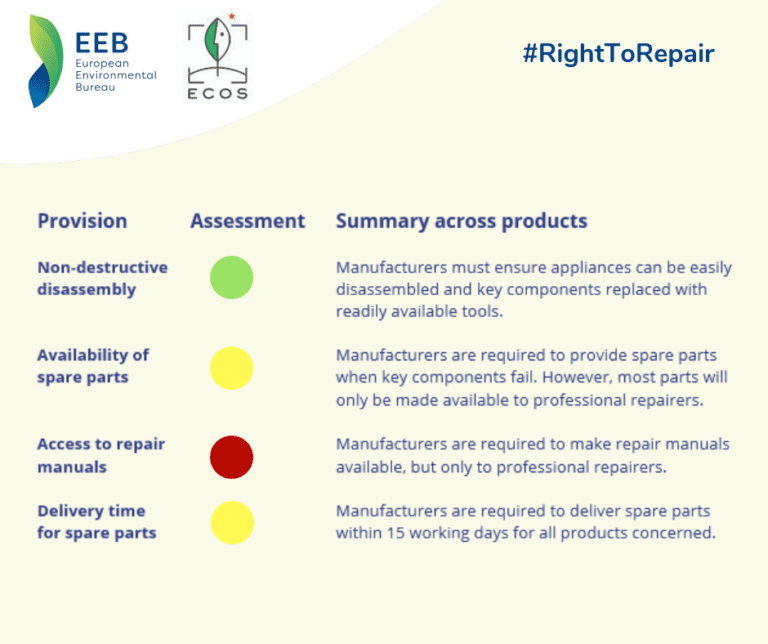 [1] The proposals are part of the EU’s laws aimed at reducing the environmental impacts of products, known as Ecodesign. Ecodesign policies have so far largely focused on energy efficiency, improving domestic and industrial products by making them perform better with less energy. Progressive policy-makers are now trying to take it a step further, to make sure that they also last longer, and are easier to repair and recycle.