Heads of state meet this week hoping to reach a final agreement on the size and purpose of the next EU budget. The outcome should tell us whether Europe is able to finance its transition to carbon neutrality.

Heads of state and government will meet on February 20 to continue negotiations on the size and priorities of the next seven-year EU budget starting in 2021. [1, 2]

Funded mostly by member state contributions and import duties, the EU budget allocates funds to governments in areas such as agriculture, transport, energy, industry and research. The current 2014-2020 budget amounts to almost €1 trillion.

In line with the EU Green Deal [3] the European Commission has promised that more money than ever before will be allocated to climate action. A special fund will be set up to support a just and fair transition for carbon-intense regions and sectors.

The Commission has proposed to increase climate funding from 20% to 25% of the overall budget – that means from €206bn for the previous years to €320bn. The European Parliament has proposed an increase to 30%.

Once governments reach a common position, they will begin the three-way negotiations with the Commission and Parliament before a compromise is agreed by the end of the year.

In a letter sent this week, the European Environmental Bureau (EEB) is urging EU governments to:

This is one of Europe’s very last chances to reverse the climate crisis. EU governments have a moral and political obligation to ensure a credible and ambitious climate budget.

Our future depends on the investments we make today. We cannot afford to continue wasting taxpayers’ money on business practices that lock Europe into carbon emissions and destroy our natural resources. EU funds must be urgently and entirely redirected towards clean energy and truly sustainable solutions.

This week’s meeting comes a month after the European Commission announced an investment plan that would help raise €100bn for European regions and industries to move beyond fossil fuels. [5]

As part of the plan, the Commission has proposed the development of a Just Transition Fund which would bring in €7.5bn of extra money from national contributions.

This is expected to be one of the most contentious issues that will be discussed this week, as governments split into two opposite coalitions. On the one side, the EU’s net contributors – led by Austria, Denmark, the Netherlands and Sweden – want to avoid increasing contributions.

On the other, the self-styled Friends of Cohesion – led by Portugal and including the majority of EU countries – are pushing for extra money to fund the Just Transition. As net beneficiaries, this is hardly surprising.

More than a budget

Despite accounting for just 1% of the bloc’s GDP, the EU budget is the most important financial tool in the hands of EU institutions. Because of its political weight, it has the potential to drive further investments from municipalities, governments and the private sector. 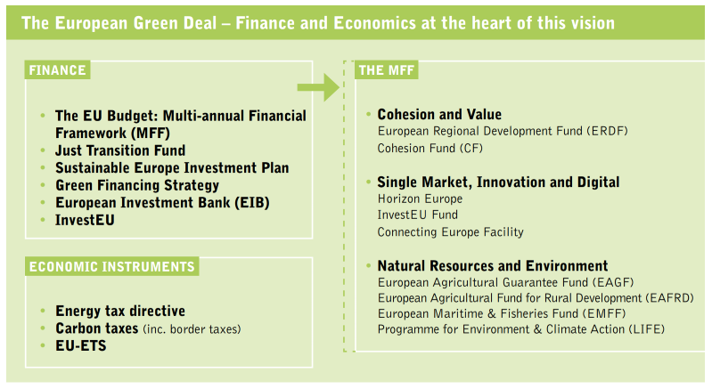 The EU budget needs better oversight and targeting. This perception was backed by 100 NGOs from 22 countries, which were surveyed and consulted by the Clean Air Action Group (Hungary) and other groups in 2018 and 2019. [1]

The groups gave a mixed review of the EU budget, arguing that while some money were well spent on climate mitigation and environment, many projects continue to fund the expansion of fossil fuels and that not enough money has been spent efficiently.

They also complained that funding at the national level has been riddled with poor governance and corruption in a number of countries. [6] Only a month ago, in the latest scandal linked to EU funding, 94 people were arrested in Italy over the allegedly fraudulent use of EUfarm subsidies. The accused turned out to be affiliated to mafia clans which carried out several scams to obtain EU funds in the order of €5.5m, media reported. [7]

[1] A budget to address the climate crisis, European Environmental Bureau 2019

[4] NGOs wrote to the EU governments this week to demand a strong budget for climate action. See letter here.

[6] The Money Farmers: How Oligarchs and Populists Milk the E.U. for Millions, The New York Times 2019