Despite the ongoing COVID-19 pandemic, climate change and the environment beat infectious diseases on the list of priorities expressed in a pan-European youth survey. Despite years of populist scaremongering, migration comes close to the bottom of young people’s concerns

Poll – conducted by the renowned public opinion research agency IPSOS on behalf of the EEB and its partners in the Climate of Change project – canvassed more than 22,000 people aged 15-35 in 23 European countries. It gauged young people’s understanding of and attitudes towards climate change, migration and the current economic model. 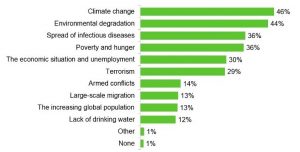 This confirms that the worries of the activists in the youth climate movement are mainstream, not fringe, concerns for young people. This suggests that, despite the immediate corona crisis and populist rhetoric, young people are generally clear sighted about the long-term challenges facing humanity.

On the question of what they believed to be the most serious problems facing humanity, climate change (46%) and environmental degradation (44%) were ranked the highest by respondents.

Climate ranks a full 10% above the spread of infectious diseases, despite the fact that we are in the midst of a global pandemic and COVID-19 tops the news agenda daily. 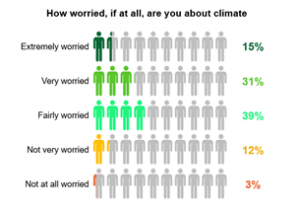 Moreover, many of those who did not rank climate amongst their top priorities were, nonetheless, concerned about it. This is reflected in the fact that 84% of respondents said they were worried about climate change and 65% believed it would affect them directly.

Fake news does not appear to have affected the perceptions of young Europeans, with only 8% of respondents believing there is no such thing. as climate change. The vast majority are convinced that climate change affects every ocean and continent (86%) and human activity is to blame for global warming (83%).

The vast majority of respondents (77%) are convinced that our consumption habits are not sustainable and (71%) that the economy is rigged to the advantage of the rich and powerful.

Reflecting an apparent perceived need for systemic change, more than half (52%) believe that business and industry, followed by governments (49%), bear the greatest responsibility for tackling climate change.

On 22 April, the EEB, in partnership with Oxfam Germany, will launch of a major new report, also produced in the context of the Climate of Change project, which exposes the destructive social and environmental impact of the current economic system and propose an alternative blueprint for a fairer wellbeing economy that operates within the natural boundaries of our planet.

The Climate of Change consortium is also launching a pan-European petition demanding policy changes that will safeguard a healthy and sustainable tomorrow for current and future generations. 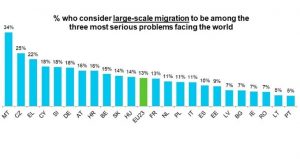 In contrast, despite years of scaremongering about migration by populist politicians and sensationalist segments of the media, young people ranked large-scale migration as one of their lowest concerns, with only 13% placing it among their top three and 45% believing that migrants contribute to our societies.

Nevertheless, young people are not entirely immune to populist rhetoric. About half (51%) agree that most migrants who want to seek asylum in their country are not really refugees, while 38% agree that our borders must be entirely closed to migrants.

Although awareness of the term climate migrant was low (only 32% had heard of it), more than half (52%) were convinced that climate change would lead to more migration in the future.

The full survey can be downloaded here: https://eeb.org/library/pan-european-survey-climate-to-priority-for-youth/

Reuters news agency reported on the survey in this article: https://www.reuters.com/article/climate-change-europe/climate-not-covid-the-biggest-worry-among-young-europeans-poll-idUSL8N2MD2EW

About Climate of Change

With the EEB in Brussels and partners across the European Union, Climate of Change (#ClimateOfChange) is an EU-funded project which seeks to inform young people about the consequences of global warming, including on migration, and to empower them to campaign for and advocate change.