Almost everyone living in a city in the European Union is breathing air that is harmful to their health, according to a new report by the European Environment Agency (EEA) published today. Road transport is a major source of harmful pollution, but the report’s authors warn more must also be done to tackle pollution from energy, industry, households and agriculture.

The European Environmental Bureau (EEB) is Europe’s largest network of environmental organisations with around 140 members in over 30 countries.

“We all have the same right to breathe clean and healthy air but people across Europe are breathing toxic fumes every day. The fact that so many of us are exposed to harmful air should be a wakeup call to governments about the need to take immediate action to reduce emissions. Europe’s transport must be transformed, and our energy infrastructure must move beyond fossil fuels, especially coal. The report also shows that while emissions from most sectors have fallen, agricultural emissions have remained more or less stable for the last 20 years, with an increase of ammonia emissions in recent years.”

The EEA’s annual ‘Air Quality in Europe’ report is based on the latest verified air quality data from 41 countries across Europe. It includes figures about the number of people living in places where EU, and consequently WHO, air quality standards are being breached.

The report concludes that 95-98% of people living in European cities are exposed to levels of ozone above the levels set in guidelines issued by the World Heath Organization (WHO).

High up in the stratosphere ozone provides essential protection against the sun’s rays but at ground level ‘bad ozone’ is a harmful form of pollution. Ground-level ozone as ‘secondary pollution’ forms when nitrogen dioxide (NO2), methane and other substances react in the presence of solar radiation.

NO2 pollution is mostly caused by dirty diesel-fueled transport, industry, and the burning of coal; while more than the 50% of methane emissions in the EU are caused by the agricultural sector. Methane is also a powerful greenhouse gas.

Breathing in ‘bad ozone’ causes irritation of the eyes and throat, increases the risk of acute respiratory diseases and reduces lung function. In addition to being harmful to human health, it is also toxic to vegetation, damaging forests and reducing crop productivity.

The report covers a broad range of pollutants and shows that the agricultural sector is responsible for more than 90% of ammonia emissions in the EU. Ammonia contributes to acid deposition and eutrophication, negatively affecting soil and water quality. It also reacts in the air to form secondary particulate matter: the EEA report highlights that while other emissions have fallen, ammonia emissions from agriculture actually rose in the period 2013-2016.

The report also again highlighted the difference between the EU‘s current limit values and the WHO guidelines. 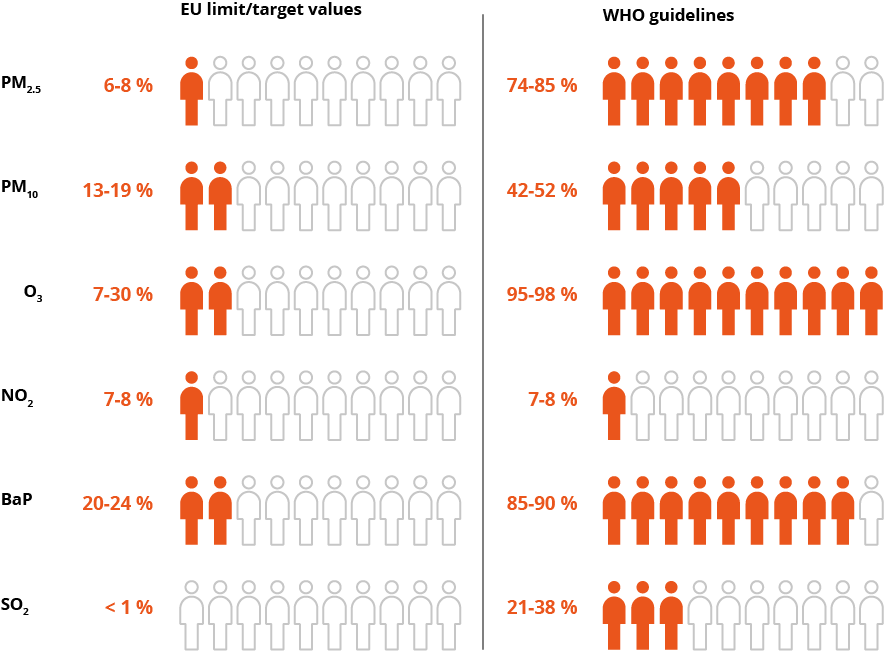 Earlier this year, the European Commission confirmed it was sending Germany, the UK, France, Italy, Romania and Hungary to Europe’s top court for persistently failing to improve their air quality. Spain, Slovakia and the Czech Republic were spared further legal action but warned their efforts would be monitored closely.